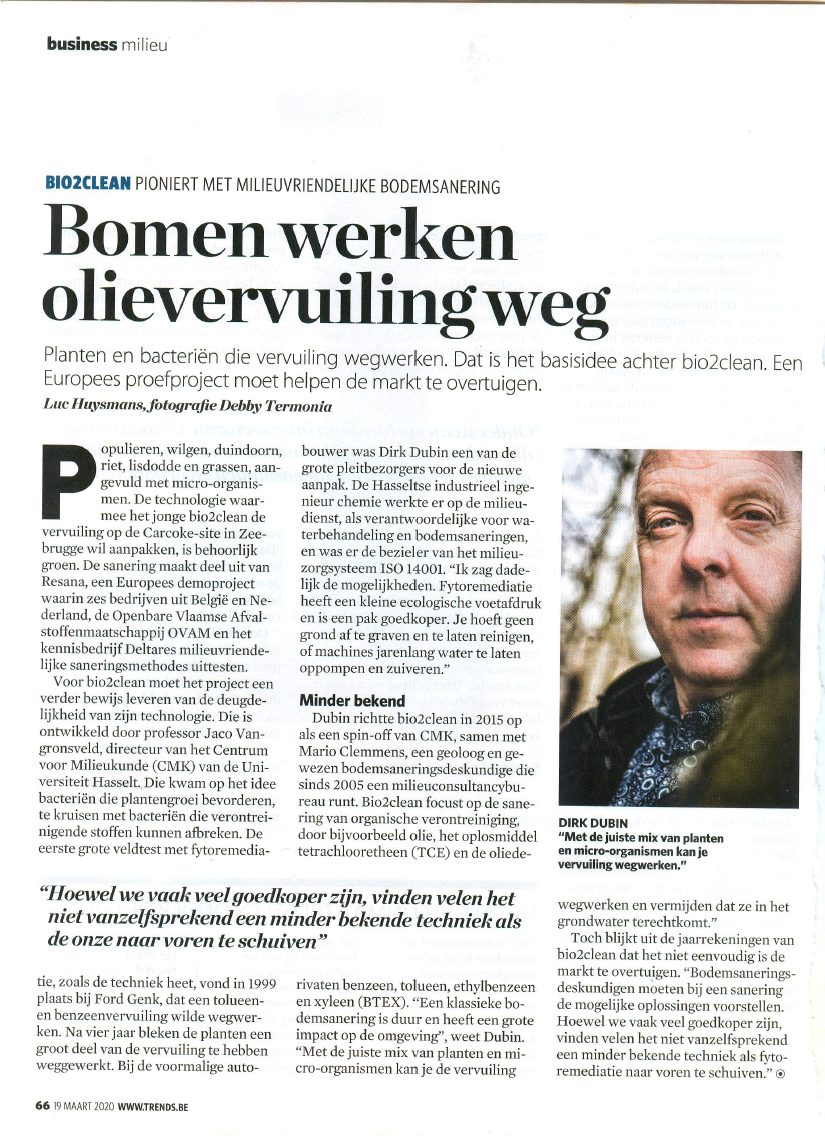 Plants and bacteria that eliminate pollution. That is the basic idea behind bio2clean. A European pilot project should help convince the market. Poplars, willows, sea buckthorn, reed, cattail and grasses, supplemented with micro-organisms. The technology applied by the young bio2clean to tackle pollution at the Carcoke site in Zeebrugge is quite green. The remediation is part of RESANAT, a European demo project in which six companies from Belgium and the Netherlands, the Public Waste Agency of Flanders (OVAM) and the knowledge company Deltares are testing environmentally friendly remediation methods. For bio2clean, the project must provide further proof of the quality of its technology. It was developed by Professor Jaco Vangronsveld, director of the Centre for Environmental Studies (CMK) at Hasselt University. He came up with the idea of crossbreeding bacteria that promote plant growth with bacteria that can break down pollutants. The first major field test with phytoremediation, as the technique is called, took place in 1999 at Ford Genk, which wanted to eliminate toluene and benzene pollution. After four years, the plants appeared to have eliminated a large part of the pollution. At the former car builder, Dirk Dubin was one of the great promoters of the new approach. The Hasselt industrial engineer in chemistry worked at the environmental department, responsible for water treatment and soil remediation, and was the driving force behind the ISO 14001 environmental care system. "I immediately saw the possibilities. Phytoremediation has a small ecological footprint and is a lot cheaper. You don't have to dig up the soil and have it cleaned, or have machines pump up and purify water for years". "Although we are often much cheaper, many people do not take it for granted to put forward a less well-known technique such as ours.

Dubin founded bio2clean in 2015 as a spin-off from CMK, together with Mario Clemmens, a geologist and former soil remediation expert who has been running an environmental consultancy since 2005. Bio2clean focuses on the remediation of organic contaminants, such as oil, the solvent tetrachloroethylene (TCE) and the oil derivatives benzene, toluene, ethyl benzene and xylene (BTEX). "Traditional soil remediation is expensive and has a major impact on the environment", Dubin knows. "With the right mix of plants and micro-organisms you can eliminate the pollution and prevent it from ending up in groundwater.